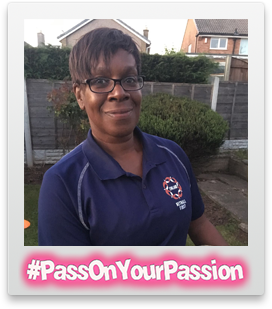 Tell us about your coaching background?

I stared coaching by assisting the head coach of the team I played for with the junior netball team. I became attracted to coaching because I wanted to pass on my knowledge to anyone interested in become skilful in their netball and who wanted to take their netball as far as they could go. I coach in school and after school settings, community settings and in Academy settings. I coach back to netballers (ladies of all different ages), Primary School - years 4,5 and 6, mixed boys and girls and Development, County Academy ages.

Was there someone you looked up to or inspired you to coach when you were younger?

I'm was inspired by Norma Plummer who coached the Australian national netball team during 2003 to 2011.

What do you enjoy most about your role as a coach/ instructor?

What would you say to someone thinking about becoming a coach?

You have to have a vision and a passion and to think about the athletes that you are coaching and not about how it makes you look.

Have you overcome any barriers to get into coaching? If so, what and how have you done this?

The distance I had to take to attend the coaching course which often meant that I had to stay overnight in a hotel especially for the final weekend sessions.