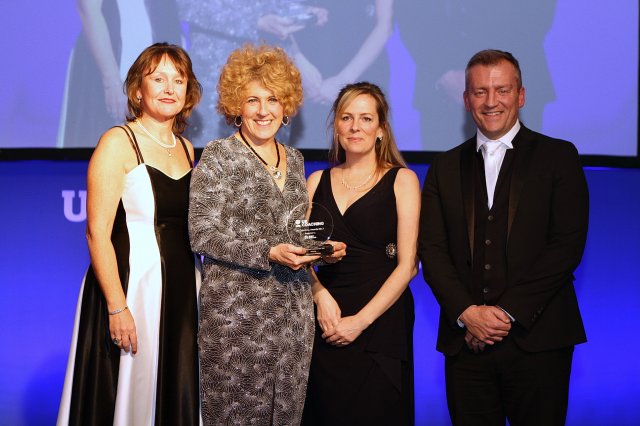 Athletics club and charity, Fitmums & Friends, is celebrating winning the Coaching Intervention of the Year award at last week's 2017 UK Coaching Awards. Now in their 20th year, the UK Coaching Awards recognise and reward excellent coaching at all levels across the UK.UK Coaching's "Coaching Intervention of the Year" award recognises the incredible achievements of Fitmums & Friends' volunteer coaching team in getting more people participating, staying and succeeding in physical activity. The award was presented at the prestigious UK Coaching Awards in London on Thursday 30 November, where Fitmums & Friends shared the stage with the coaches of the British Athletics Relay Team and British Triathlon among other award winners.Since launching in 2009, Fitmums & Friends has quickly grown to support more than 850 members in ten groups across Hull, Yorkshire and North Lincolnshire. Every week, it offers running, fitness walking, cycling, buggy and junior athletics sessions, enabling people of all ages and abilities to be more active in a friendly and supportive environment.All sessions are delivered by a volunteer coaching team, comprising qualified leaders, assistant coaches and coaches. Chief Officer of Fitmums & Friends and athletics coach, Sam Barlow BEM comments: "It is fantastic to see the hard work of our volunteer coaching team receive national recognition. I am so proud of the incredible job they do in inspiring people to become more active and helping to transform their lives. They are an amazing bunch of dedicated volunteers; most of whom came through the door to improve their own health and wellbeing, but who have since gained confidence and skills which they now use to give back to so many others through their invaluable coaching roles".

North Yorkshire Sport are pleased to be working with Fitmums to establish clubs in York and Harrogate. Head of Development George Cull congratulated Fitmums and Friends on their achievement "This award is recognition of the hard work put in by so many volunteers at Fitmums. They have been very considered about who they want to attract and how they can tailor their clubs to work for those who may be turned off by traditional running clubs. On behalf of North Yorkshire Sport I would like to congratulate Sami, Vickie and the rest of the team."