An incredible year of achievements for Megan Wilcox 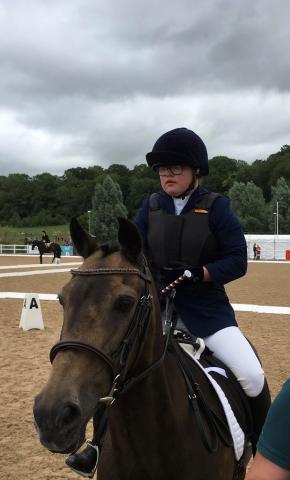 North Yorkshire Sport would like to say a huge congratulations to Megan Wilcox, who recently won the Female Young Achiever Award at the 25th annual Disability Sport Yorkshire Awards.

This award adds to an incredible 2017-18 for Megan, with some outstanding achievements in both disability and mainstream competitions. Meg's successes include a gold medal in the Special Olympics National Games, and the Equestrian of the Year Award in her Special Olympic Group, Able 2 Pontefract.

Meg's successful season began in June, when she finished as the top junior in her Intellectual Disability Class in the Regional heats of the RDA National Championships. This was followed by the National Finals in Hartpury, Gloucestershire, where there were hundreds of competitors from 18 regions. Meg was in one of the largest classes, but successfully finished an amazing 3rd with a huge personal best and also finished 3rd in the freestyle to music class.

In preparation for the RDA National Championship, Meg participated in a grass roots mainstream competition, the British Dressage MyQuest. Over the course of the spring and the summer Meg gained enough qualifying points to finish in the top 20 and so qualify for the Regional Final held in September at Epworth.

Meg, who attends Harrogate Grammar School (Year 11), competes with her beloved and rather cheeky pony, Dunkie. The pair have trained together regularly for four years, often up to 5 times a week. Determined Meg looks after Dunkie every day, and is solely responsible for exercising and training the pony, even in dark and cold weather.

August brought an exciting new challenge, Meg took part in the dressage in the Special Olympics National Games in Sheffield, representing Yorkshire and Humberside. As well as competing, Meg had an incredible experience at the games, staying in the athlete village and taking part in opening and closing ceremonies. Unfortunately, Meg wasn't allowed to ride Dunkie for the games, and had to overcome a challenge by riding another pony. Some competitors do this regularly but this was a new experience for her. She overcame her nerves and was determined just to do her best. Incredibly, her best resulted in another personal best and winning a Gold medal.

The summer didn't end there, in addition to the MyQuest, Meg was part of a 'mainstream' team for the British Dressage Team Quest competition. Meg finished an incredible 10th in the individual competition, pulling herself together to complete her test, after an early mistake. She rallied herself for the team competition and performed a personal best to help the team qualify for the National Finals. Meg was the only young rider with a disability taking part at the National finals, where the team finished in 17th.

Meg began riding at the age of 2, as Physiotherapy at Follifoot Park Riders Group. Her love for riding quickly evident! After becoming interested in all equestrian sport, Meg was keen to compete, and the sport quickly became her hobby and her passion.

After London 2012, Meg attended a demo by one of her heroes, paralympian Sophie Wells, where she also met Dunkie's previous rider, Izzy Palmer. Izzy is now on the World Class Talent programme for para dressage, she also mentors Meg to help her get the best from Dunkie. Meg has also been lucky enough to have lessons from Sophie Wells, and has even had the opportunity to wear Sophie's Paralympic medals and ride her London 2012 horse.

Meg dreams one day of being the first athlete to compete for GB in Special, Para and Olympics. Meg knows this is a very big dream, but believes if you don't even dream it, it can't happen! In the shorter term, she hopes to qualify again for RDA National Championships at a higher level this year and she continues to compete in mainstream competitions also.

Again, a huge congratulations to Meg for her outstanding and inspirational achievements, we can't wait to see what the future holds. 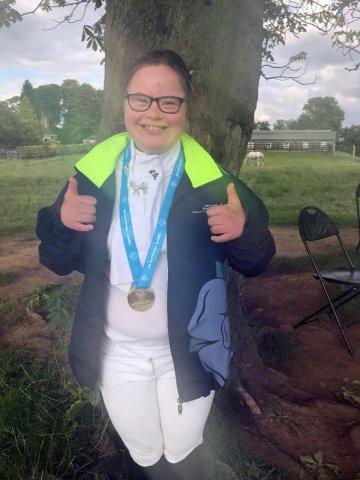