North Yorkshire County Council and North Yorkshire Sport have teamed up with a man who last year ran a complete lap of Yorkshire and are encouraging people to run (or walk) with them next Thursday, October 10, to mark World Mental Health Day.

Ben Dave (pictured left with Richard Webb right), who lives in Harrogate, last year ran the 500-mile border of the county – the equivalent of 18 consecutive marathons – to raise more than £27,000 for the mental health charity Calm.

He also set up a new running group, Early Bird Run Crew, open to everyone, which meets every day Monday to Friday.

Ben has used running as a way of coping with the mental health problems that he has experienced in the past and has also seen a dramatic transformation in his physical fitness and weight.

Ben said: "I'm really interested in how we can use running to build communities to support people with mental health issues. If people are suffering from loneliness or isolation, or mild depression or social anxiety, how can we use running to help people combat that? Because that's what I did.

"When I was badly depressed I remember sitting in my flat on my own and thinking 'I need to be around other people but I can't think of anything to do other than go to the pub, which wasn't the best place to be."

Richard Webb, the County Council's director of Health and Adult Services and colleagues from North Yorkshire Sport will be joining Ben on Thursday as the group runs and walks through the centre of Harrogate at the start of World Mental Health Day which, this year, focuses on suicide prevention.

Later in the morning, Ben will be speaking at the Every Mind Matters event at the Pavilions in Harrogate, for the local launch of a new national app which supports people to look after their own mental health.

Richard said: "Ben's lap of Yorkshire run inspired me to take up running. And it has also helped me to cope with some difficult times in my life. Mental Health is something I am passionate about in my day job and we want as many people as possible, and particularly people with mental health issues and people who work in mental health services, to mark World Mental Health Day by joining us for a run or walk to start their day on Wednesday."

North Yorkshire Sport is promoting mental health as one of its major priorities across the county and has launched a mental health fundraiser to support this work at www.nysfundraising.co.uk

The North Yorkshire Sport team, plus Ben and Richard, took part in this year's Total Warrior event to support the new fund (pictured below).

David Watson, Chief Executive of North Yorkshire Sport, added: "Better mental health is a big issue for all of us – in our work and in our lives. There is a proven link between physical activity and emotional well-being. And it's about taking part – however much or however little you do".

Ben, David and Richard would like as many people as possible to join them for the 5k run on Thursday. There will also be a short walk (2k) for people who prefer walking to running. If you are interested, turn up at the Cenotaph in the centre of Harrogate (opposite Betty's) at 6.30am. 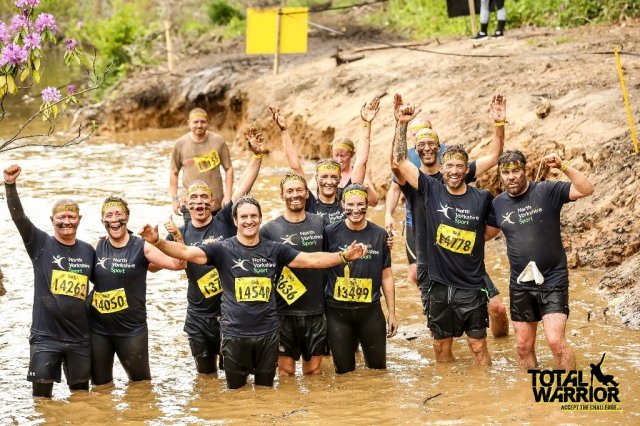