The Sportshall Athletics Champions are Crowned 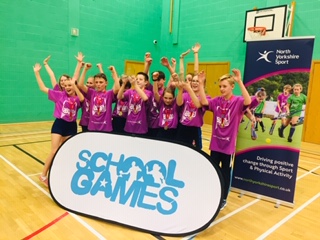 The Sportshall Athletics Champions are Crowned

Today saw schools from all over the county battle for the title of the North Yorkshire School Games Sports Hall Athletics champions at Catterick Leisure Centre.

The action- packed Year 5 and 6 county finals held in the morning included nine teams competing in both track and field events, starting with the girls and boy's obstacle race.

Later in the afternoon saw the Year 7 Boys and Girls battle it out with individual competitions being held.

Throughout the day participants were cheered on by their team mates. The atmosphere in the sports hall throughout the day was electric! The standard of competition was extremely high for both Primary and Secondary events.

There was a double crown for St Aidan's, Harrogate as they took the winner's title for both year 7 girls and boys! A fantastic achievement from both teams.

A huge thank you to everyone who competed. North Yorkshire Sport's Lucy Psarias said "We would like to congratulate all the teams who gave their best at today's finals, with a huge well done to those that go home with a medal. A massive thank you to our young leaders from Richmond High School for their support!"