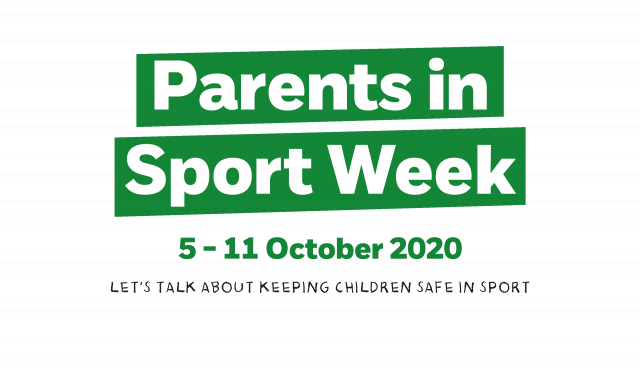 New research found less than four in ten parents* actively sought to understand the safeguarding procedures of their local sports/ leisure clubs before signing their child up to take part in practice sessions, matches and competitions.

An online YouGov survey, conducted on behalf of the NSPCC showed that 38% of parents actively tried to find out whether basic safety measures were in place before allowing their child to join a club.

Further cause for concern is that 38% of parents* said they had either never received or could not recall whether they had been sent any information about safeguarding measures by their child's sports/ leisure club once they were a member.

Tackling these issues and encouraging positive parental involvement in youth sports is the aim of the NSPCC's 'Parents In Sport Week', which launches today (Oct 5).

'The Sports Parents Promise' also encourages parents to be a positive influence when watching their child's games from the side lines.

David Watson, the CEO of North Yorkshire Sport said: "We are delighted to support the NSPCC's Sports Parents Promise, and we would urge anyone whose children are involved in sports to make the pledge. By doing so, they will ensure they are in the best possible position and armed with the best knowledge to support their children if they should need it."

"Checking on a club's safeguarding procedures before signing up will give parents the peace of mind that their child is in a safe and secure environment.

"That's why we're encouraging parents and sports clubs across the country to make our Sports Parents Promise, because it's essential that everyone plays their part in protecting children and help make every sporting experience a positive one"

Every sports club and activity provider should have a welfare or safeguarding officer as well as a safeguarding policy and the NSPCC is encouraging every parent to find out who to contact in their children's sport if they have any questions or concerns.

Former British Lions and Wales rugby captain Sam Warburton said: "For many young people, sport plays a huge part in their childhood, as it did for me, and now as a father myself I recognise how important it is that any child or parent who has concerns about safety, wellbeing or potential abuse is able to speak out and seek support.

"Safeguarding isn't always a priority for parents when deciding which sports club their child will join, often overshadowed by a team's success rate, subscription cost and the experiences of other families. If we are to make sport safer for our children we need to make it easier for parents to know how they can support a safer sports environment and give them the confidence and knowledge to act when needed."

Over the last few months the NSPCC has been working with the British Athletes Commission in response to concerns being raised within gymnastics. It has set up a free, confidential and independent helpline as a safe space for anyone involved in gymnastics to voice any concerns or issues they may have.

As part of our activities during Parents In Sport Week there will be special webinar on Sunday, October 11, involving gymnasts Amy Tinkler and Mimi-Isabella Cesar, a coach, a psychologist and a member of the NSPCC's CPSU who together will be looking at how parents, coaches and young gymnasts can support each other and feel safe in sport. Places in the online audience can be booked online, and there is also a link to make a voluntary donation to support Childline.

The event is available for all to join and will be presented by Sports Presenter and NSPCC Campaigner for Childhood Charlie Webster.

Charlie said: "It's vital that any child or parent who has concerns about safety, wellbeing or potential abuse is able to speak out and seek support.

"By supporting 'Parents in Sport Week' and making the 'Sports Parents Promise', you can help ensure your child and every other child is properly protected by their clubs, and by sharing the details of the campaign on social media, you can help spread the word about the campaign."

To keep up to date with the latest news from the NSPCC's Child Protection in Sport Unit, follow @TheCPSU on Twitter. To support the NSPCC's Parents In Sport week on social media, follow the campaign using #ParentsInSportWeek2020.