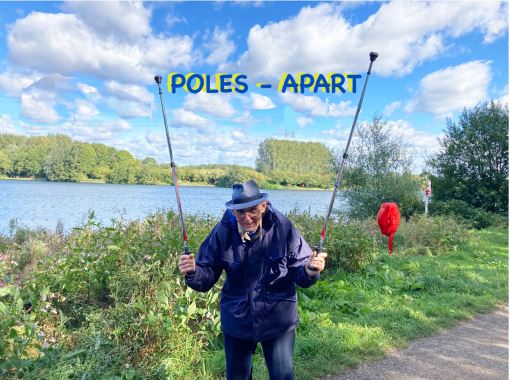 In his own words:

'Sometime ago I joined an Exercises Class called, 'Strong and Steady,' sponsored by North Yorkshire Sport, the aim is to encourage physical activity among elderly people, to reduce the risk of falling. I am sure it has helped me to keep steady on my feet. When I enrolled in the class, there were just two men and a dozen or so women, all keen to follow the guidance given by Jenny Earle, our enthusiastic Postural Stability Instructor.

It was a joy to take part each week, some of the routines were done to music, the exercise class made a very happy social group. We shared lunches from time to time; particularly at Christmas, it was all good fun; however, it all came to an abrupt end in mid-March this year, when Lock Down was ordered. We have greatly missed both the exercise and the convivial company, we all agree, it is not the same, exercising at home, especially for the ones living on their own.

However, in early September Jenny Earle arranged to meet us to suggest that Nordic Walking exercises could be taken out of doors, she had permission to run classes in Great Ayton Cricket Club ground as long as we treated the main playing area as being sacred. I fell in love with Nordic walking from the start and, with my important birthday in mind, I resolved to do a series of short walks on days leading up to my 9oth birthday, setting myself a target of 90 kilometres or at least 90,000 steps, the distance of each walk to be recorded on the Health App on my smart phone. I also decided to give myself a charity challenge, setting aside £9 for each day that I walked.

Jenny's daughter, Chloe Cornish, is the Financial Times journalist based in Beirut, and, after reading her article "one month on" after the explosion in the port of Beirut, I made my chosen charity, The British Red Cross Beirut Emergency Appeal. I have encouraged local people to sponsor one of my walks and donate any amount with a nine in it, the currency, being it Stirling, Euros, Dollars, Zlotys or whatever, I would call my Project: "Dick Stainsby's Poles Apart, Nordic Walking for the Red Cross Beirut Emergency Appeal" Shortly afterwards, a lady knocked on my door and gave me a ten-pound note requesting me a penny change – she said she was giving me £9.99! The idea of including a nine in the figure has taken off!

My Nordic Walking has helped me to concentrate on this event, it has led me to realise we are lucky to live in the UK in spite of the pandemic and economic problems we may yet have to face.

I've already achieved my target, 34 short walks and have totalled 95.5kms and 177,202 steps; £1,103.95 from my walking and donations either given to me. or disclosed to me. Perhaps it will be a greater amount now that I am launching my project to my friends in the UK, Australia, Canada, New Zealand, Mexico and South Africa.

My method of donating is, by card, to the website www redcross.org.uk "British Red Cross Beirut Emergency Appeal" I give them my email address each time, I get a message back thanking me for my efforts. My suggestion to friends is that they donate in the same way, I feel very blest.'

I'm sure you will agree, an inspiration to us all, well done Dick!