The Great North Run is a bucket list marathon for many, with iconic landmarks such as the Tyne Bridge and a reputation for supporting fundraising for many charities up and down the land.

North Yorkshire Sport were granted charity places for the first time ever and a team of 3 represented us, completing the event and achieving some personal goals on the way.

Garry and Darren have played sport throughout their lives, but during lockdown took up running as a way to stay fit and to manage their own mental health.

Garry and Darren both completed the half marathon in under 2 hours, a very respectable time for a half marathon. After the event Darren said:

"We had an amazing time at the run on Sunday-despite the hills. We are hopeful the money raised allows the charity to continue doing its amazing work in the local area"

Rachael is a Harrogate resident and is no stranger to sport with honours as a World Thaiboxing and British boxing Champion. Rachael has worked with North Yorkshire Sport in her role as a sporting athlete mentor. Rachael was inspired to run following her mother benefitting from the work of North Yorkshire Sport over lockdown. On a more personal level, Rachael has lost friends due to mental ill health and raising funds for mental health is a subject very close to her heart. After the run Rachael commented:

"The power of sport to bring people together and to lift people was evident at the Great North Run and despite picking up an injury before the run the spirit of the crowd and other runners helped me through. It's that ability of sport to provide support and encouragement that makes it such a powerful tool in helping improve people's mental well-being and why the work of North Yorkshire sport is so critical for improving the lives of people across our region."

The sponsorship pages are still open and you can sponsor Garry and Darren here and Rachael here.

If you want to raise funds to support North Yorkshire Sport then please email info@northyorkshiresport.co.uk 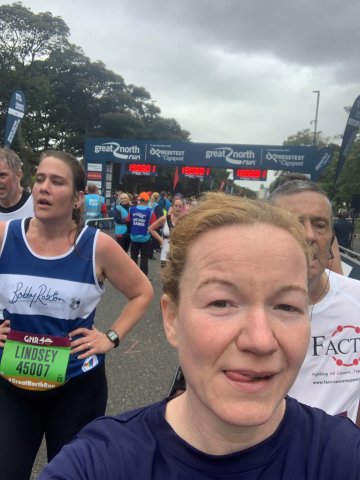