A Tribute to Bruce Dinsmore 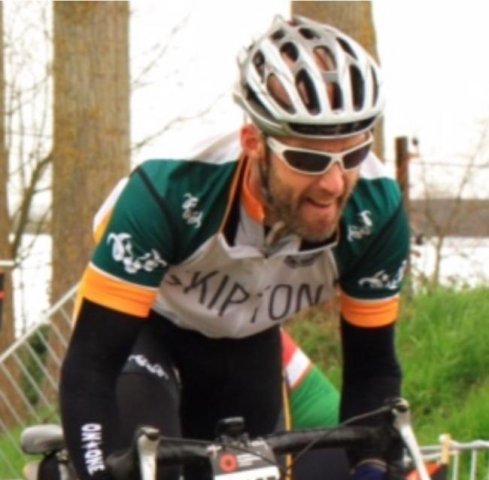 North Yorkshire Sport were devastated to learn of the recent passing of Bruce Dinsmore, who had operated as the Sports Development Officer for Craven District Council.

Bruce was a knowledgeable, passionate and dedicated individual who achieved some fantastic things in his work in the district. He was also generous with his time and with his insight, and will forever be remembered through the legacy of his work.

My husband, Bruce Dinsmore, will be missed by many: his smile whizzing past on our tandem, the ultra fit cyclist who chatted effortlessly through the most punishing hills on a club ride, or simply as 'Mr Sport'.

Bruce worked for over 18 years as the Sports Development Officer for Craven District Council. Many have benefitted from his expertise and his involvement in countless major projects and events: Race for Life, Parkrun, Three Peaks Race, Three Peaks Cyclocross and the Santa Fun Run to name a few. Bruce was also instrumental in making sure the district didn't miss out on funding from developers. Over the years, Bruce secured hundreds of thousands of pounds that have directly benefitted sports clubs and community groups, such as the 3G pitch at Sandylands. He negotiated the planning gain that has been used by the tennis centre for new floodlights and resurfacing, and started the conversations with Adam Cox for the indoor courts project, so all you tennis aces can keep your toes warm next winter we hope!

Some sports and community projects take years to come to fruition and Bruce had the patience and tenacity needed to ensure they did. This has most recently been seen in Cross Hills at the old Malsis School site - now home to new pitches and a club house for Sutton Juniors football club.

David Watson, chief executive of North Yorkshire Sport commented: "I can say in all honesty I have never met someone so dedicated to his role and the development of sport as he was. The welfare of the citizens of Craven was always at the forefront of any conversation."

One of Bruce's last projects was the new play area in Aireville Park. He worked tirelessly with the Friends of Aireville Park to raise the money needed, and his expertise has helped transform the park. Bruce was committed to very high standards and would always go the extra mile, often interrupting a day out just to check on construction progress at one site or other, with our son Axel ever ready to test drive the completed playground.

Bruce had a passion for cycling. When I first met him in 2007, he'd just cycled the 2,500 mile Great Divide race from Canada to Mexico, a race fewer than 10 people had ever completed at the time. Bruce and his mate Steve actually set off a further 250 miles north of the Canadian border in Banff. I guess that was a bit of a warm up.

You can imagine his delight when it was announced the Tour de France was coming to Yorkshire in 2014 and planning the event through Craven became part of his job. He was like a kid in a candy shop the day we bumped into Bernie Eisel having a pit stop at Coopers cafe as part of their training ride. Typical Bruce got autographs for his mate's sons who are huge cycling fans.

Later Bruce worked with Skipton Cycle Club to hold the cycling sportive, Le Petite Depart, on the route used by the Tour de France: another huge success. Bruce also organised the Skipton Triathlon for CDC. Both events remain a part of his legacy.

The last two years, since having a stroke in January 2020, have been possibly Bruce's greatest challenge, but once again he rose to it with grace and optimism.

Kathryn Hird from Speak With IT, who volunteered as a speech therapist for Bruce said: "As soon as I met Bruce, I instantly felt at ease. His unfaltering positive attitude, sense of humour and determination was an absolute joy."

The support of Bruce's sisters and mum and also my family remains a beautiful thing, I can't imagine how we would have got through this without them. Bruce's friend Christian Townsley has kept our spirits up with his weekly visits, walking shoulder to shoulder with us through the darkest of days and celebrating Bruce's innumerable triumphs.

Kathryn and Kirsty from the stroke ward at Airedale General Hospital showed us what was possible and guided Bruce towards walking again and independence; independence he so proudly demonstrated on his twice daily walks around Skipton recently.

2021 was transformed when Adam Winthrop gave Bruce a tandem so that he could get back on a bike. I don't have the words to adequately convey the joy that gift brought us both. Bruce's friend Alan Goldsmith organised two big social rides with Bruce this year, days I'd thought unimaginable after his stroke.

And suddenly he's gone. Bruce died gently in my arms on Wednesday November 17, in Airedale Hospital. Our unfathomable gratitude goes to the staff of the NHS who gave us the last two years, which we grabbed with both hands. He was truly learning to fly again and his death comes as a great shock.

All the team at North Yorkshire Sport would like to express our condolences to the family and friends of Bruce.