Getting the heart and head going again 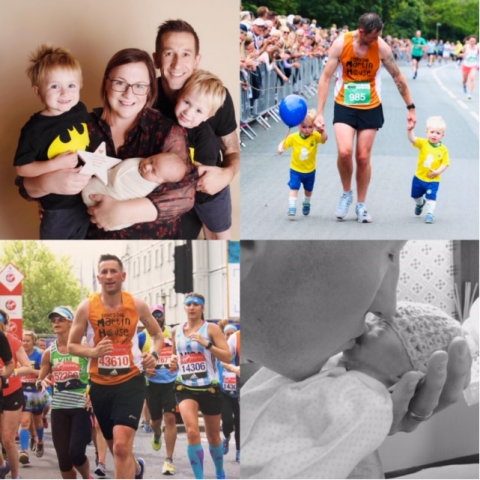 - Please be aware that this post covers themes of baby loss, PTSD and suicidal thoughts.

Development Manager Gavin Phillis talks about how being physical active, running in particular was a massive tool to help him cope with his mental wellbeing challenges over the last five years. He used running to support his mental wellbeing after tragedy hit his life.

Throughout school life I always felt like I struggled academically but my saviour and strength were sport, especially football. Goalkeeper was a position that I defaulted to as I hated running and I was overweight. However, sport provided me with friendship, socials, team skills and was probably a saviour from the school bullies. I tried very hard academically but just did not get it, sport was a platform to fit in with others. Over time I learnt to enjoy it more and more and amazingly, much to teacher's disbelief, I began to excel.

I left school in 2001 and went onto study sport at college and then onto university. Alongside this, I played semi-professional football, a highlight playing in the FA cup even if it was only preliminary and qualifying rounds. But it wasn't until 2015 I truly discovered the power that sport and physical activity can have on people's lives… here is my story…

My route to parenthood has been an emotional journey (and that's a major understatement), however my wife and I were over the moon to find out in April 2015 that we were expecting our first child. Years of ovulation sticks, negative pregnancy tests, sadness and hopelessness were all suddenly forgotten. Like any expectant family we decorated rooms, purchased a pram, cot and a few bits of clothing. Ordinary preparatory stuff, I guess.

We dared to dream about first moments, smiles, teeth, words, football matches, days of school, wedding days etc all the hopes and dreams you have for your children that may or may not ever happen.

On the 22nd October, we were admitted to hospital with premature rupture of membrane (my wife's waters broke early) and on the 24th October at 16:24pm my beautiful baby girl Esme was delivered at 27 weeks by emergency caesarean section. She was born a good weight for her gestation and was quickly transferred to the neonatal unit. Esme was beautiful, she had big brown eyes that were wide open, amazing curls in her silky brown hair, and the Phillis nose (that her mum didn't want). Her skin was a little transparent due to her prematurity, but it gave a lovely warm red glow in her incubator.

There was no fear at that point, we were reassured by the medical professionals that Esme was doing well, but unfortunately, an infection was bubbling underneath the surface: My wife and Esme both had developed sepsis and needed critical care.

I was dashing between the delivery suite and neonatal ward, updating my wife on Esme's condition and trying to support both. At midnight my wife was well enough to go see her darling baby girl for the first time. Esme got so excited to hear our voices, she wriggled with excitement. I used to read to my wife's tummy every night, it was evident Esme knew our voices. We were told by the nurse to quieten down as Esme needed to rest. It was magical and a moment that will stay with me forever.

However, Sepsis combined with prematurity tragically was too much for my baby girl and Esme passed away in my arms at 05:50am the next day.

There are not the words to describe that crippling moment and what unfolded after, but grief and horrendous mental health understandably took over my life. I booked in to see my GP, I needed help!!! After a lengthy conversation with my GP, I left being told 'there is nothing I can do to help you, you are grieving and not depressed'

Great…., I had nowhere to turn. I didn't want to burden my wife with my grief, when she was dealing with her own. I felt isolated and alone. This was compounded by other people's reactions, people I knew would cross the street to avoid me, changed direction in the supermarket just so they didn't have to speak to me. To be honest, before Esme died, I didn't know what to say to someone who's baby had just died. Through no ill intention, people said stupid things like "she is in a better place" or "everything happens for a reason" Really??? Where is better than with her parents? What is the reason my baby died? I even had someone say 6 days after she passed away "sorry I haven't been round sooner, I have had the week from hell"

My grief was on a downward spiral, I was angry, depressed, frustrated, hurt. I questioned everything, over analysed every comment. I hated the world. I wanted answers. I wanted Esme back.

I'll never move on, I'll never forget and I will never be ok. I will always have questions that will never be answered but can say that with time, amazing support and physical activity I have got to a point in my life where I am happy to live alongside what happened; somewhere I never thought I would be.

I remember being sat on my sofa about four weeks after Esme passed away, I needed to get out of the house, fresh air, the outdoors or something. I put on my trainers and ran down the disused railway line at the back of my house, I did not run fast or even that far, I think I was out for about 20 minutes. For 19 of those minutes I cried my eyes out. But, on my return I felt a little lighter. Not better, not ok, not cured, not 'OVER IT' just a little lighter and in a little bit of a better headspace.

I went again a few days later after getting over the aches and pains of not doing anything for a while and then suddenly doing a 20-minute run. Again, after that run I felt a little bit lighter and clearer in my mind.

Over time I ran a little bit more regularly, to the point where my wife could tell when I needed to get out and go for a run to help my head.

Around 8 months after Esme passed away, I was faced with my first ever Father's Day, a Father's Day without a baby or child. I was so anxious about that day, I was snappy, upset, maybe depressed. How could I wake up that day without having my child to celebrate with, how would I feel that day, I felt like I was a fraud.

I decided to plan a run to start my day, whilst in early pregnancy we walked a lot around the local woods, the bluebells were out and the surroundings were beautiful, so I planned my run through those woods early in the morning. On my return I was greeted by my wonderful wife who had prepared a breakfast for me, she presented me with a card and a small gift. The gift was a custom mug, that says our star shines brightest in the sky. I have that mug with me at work to this day.

My first father's day was not what I ever pictured but the run allowed me to clear my stress and anxiety that I had woken with, it allowed me the headspace to be with my daughter in mind, protected time to let my body cry whilst channeling my energy into something positive, it certainly made my ability to cope with the challenges of the day so much better.

A year later I was diagnosed with PTSD (Post Traumatic Stress Disorder). I experienced horrendous flashbacks and nightmares that came with that were so clear, it was like it was happening again every time. Helplessly holding my daughter as she passed away and closing her eyes after life had left her body.

This led to some suicidal thoughts. The only way I could be with my daughter was to be dead with her. I knew how and where I would do it. Fortunately I never actioned my thoughts.

I can never say for sure that running and being physically active stopped me from taking things further with those thoughts but I wholeheartedly believe that running combined with the support from Martin House Children's Hospice, and the love for Esme and my wife prevented me from taking things further. I know that when I am at my lowest, running and talking helps pick me up, helps me control my head, helps me to get things out and think a bit clearer.

I did start leaving my running kit in the car so that if grief felt too much whilst I was at work I could get out for a run and hopefully improve my mindset at that point.

I only ever told my wife and my therapist about all that, after a few discussions and picking brains my therapist said

'I do not need to prescribe any medication because you control your thoughts through talking and running, those are providing the coping strategy that you need, it's tough for you but they will both support you better than medication at this point '

It doesn't matter how far or how fast I run, I have run two miles and felt a little clearer in my mind and run 23 miles and felt a little clearer. All I know is that it really helps me. Being physically active and running for me has supported me to move forward with my life alongside my beautiful girl. It supported my mental wellbeing so that we could extend our family, Esme now is an older sister to three fantastic brothers, twins Myles, Emmett and little baby Auryn.

Physical Activity helped me with my mental wellbeing

Physical Activity helped me with my mental wellbeing and alongside this my physical fitness has improved. Almost a by-product for me. My weight is better controlled, my energy levels have increased, sleep is better although the three amazing boys in my life challenge this on a daily basis.

Alongside exercise we received unbelievable support from Martin House Children's Hospice. I got to a point where I wanted to give back for the amazing support they provided my wife, Esme's grandparents and myself, I started to incorporate my running into fundraising for them, I felt like doing this would keep Esme's memory alive. I started to swim and swam the Great North Swim; I organise an annual charity golf day and I have now run the London Marathon twice. Raising around £20,000 in the process.

I have gone from hating running to running being my therapy, my coping strategy for any grief attacks, work stresses and anxieties.

Running is my tonic, it may not be yours but there is some form of physical activity that will help your mental wellbeing, it's just trying to find out what that it is.