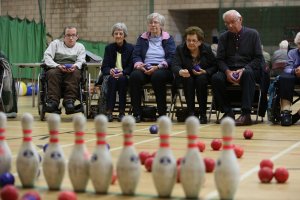 North Yorkshire Sport working in partnership with Hambleton District Council as the delivery partner, Sporting Memories as the training partner, and Your Consortium as the fund administrators, identified that there was an opportunity to develop a programme that uses age appropriate sport and activities to address isolation and loneliness concerns for older people (55+) in rural areas.

The intention of the Primetime programme was to engage with lonely and isolated members of the local communities, using age appropriate sports and activities as a draw, but incorporating a 'tea break' to chat and socialise.

Hambleton District Council identified and worked with 5 villages within the District to develop, promote and deliver the programmes to their local communities. They Engaged local lead volunteers and village forums from the offset to ensure the feeling of 'ownership' of these groups. For example, Robin Walton from the Husthwaite Group was instrumental in developing that group; drawing in additional funding, attending appropriate workshops and arranging 'home and away' matches with the other Primetime groups.

An initial 8 weeks of adapted sports and activities was delivered to the groups and after those 8 weeks equipment was left for the groups to continue participating.

Support was provided to enable the groups to arrange 'home and away' matches against other newly formed Primetime groups, culminating with a celebration event which all 5 groups attended.

Hambleton District Council developed and provided a booklet detailing a variety of session plans, games and adaptations for each of the groups, whilst North Yorkshire Sport provided additional training through the English Federation of Disability Sport/Sport Coach UK, Active Kids 4 All and Inclusive Community Training workshops. Further support was also provided from North Yorkshire Sport with group funding applications and promotion of the programme.

The programme has not only addressed a need for the intended target group of people but it has provided an outlet and focus for local lead volunteers and village forum groups with regards engaging and developing the sessions. For example Husthwaite have created links with local schools, and the group are getting involved with intergenerational work.

Developing the groups and social networks has enabled members to support each other through trying times including bereavement.

North Yorkshire Sport and Hambleton District Council have worked closely with the Sporting Memories charity to enable staff to deliver reminiscence sessions at the Primetime groups.

From the initial learnings of the Primetime pilot a Club as the Hub programme has been developed and received funding to address loneliness and isolation concerns of older people in rural areas of North Yorkshire. The programme will work with clubs within the county to upskill them on the needs and considerations of an aging population, and actively promote their venues as a social meeting point for the local community.

'I like Primetime because it's nice to see people who would normally stay at home coming up here laughing, joking and having a good time. The problem with recruiting more participants is people won't admit they're old enough to join in. They simply don't realise what they're missing.'

'Primetime is great for Chloe as it gives her the chance to be like a normal worker and makes her feel needed. She is missed when she isn't there, and looks upon participants as her friends, Malcolm and Margaret I think being her favourite! My Mum enjoys coming along too, I think she thinks she's some spring chicken at 78 but hey ho. As for me, I have met many nice people especially Jill, and feel very welcome coming from a city to Husthwaite and being accepted. I enjoy the atmosphere and of course seeing Chloe happy. I hope Primetime can continue.'

'The older ones sit round at coffee time and chat. They have such a positive outlook. They all look forward to Primetime.

My mother greatly looked forward to the weekly outing. She always came back happier, even the trip out helped, she felt better all day after that. As a carer living with an elderly person, I can't say enough in favour of it.

As Chairman of HVH;

'One of the stipulations of the Lottery for providing a grant for building the new Village Hall was not about the building, it was about providing activities for all members of the community to get involved in. Primetime ticks all the boxes, in that respect.

Chloe comes up with imaginative ideas, she plans and works it all out at home, creating variations of the games to keep them interesting. One of the reasons people keep coming is because of Chloe. She befriends everyone, without favouritism. She remembers everyone's name, because she knows us all now.'