The Satellite Club initiative was launched by Sport England in 2013. It brings together existing community sports clubs and new venues in colleges, schools and community contexts. The community club (known as the 'hub' club) sets up an 'extension' in a new venue, with coaches and volunteers linked to the hub club delivering activities to participants with an aim to engage young people who would not otherwise participate in community sport. The initiative aims to provide a stepping stone between school and community sport and to encourage sustained participation particularly among 14-25 year olds, where there is evidence of high levels of drop-out.

These Satellite Clubs participants were fairly 'sporty' before attending Satellite Clubs sessions; over 3 in 4 of them were already taking part in sport at least once per week before attending. At the time they were surveyed, this had increased still further with over 60% taking part three or more times per week and over 90% at least once per week. 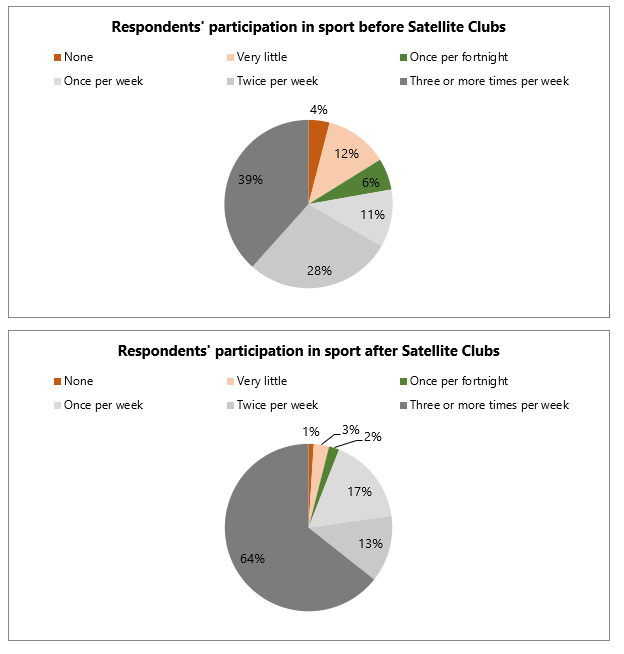 Comparing the responses of individual respondents, we see that 48% of these participants are taking part in sport more frequently now than they were before taking part in Satellite Clubs. If this were representative of the overall population of Satellite Clubs participants and this change were sustained, there would be over 800 young people in North Yorkshire doing more sport now than they had previously.

Participants also classified themselves in terms of their relationship with sport, with the largest number of respondents describing themselves as enthusiasts, as seen below:

The most common motivation for participants to take part in Satellite Clubs was a desire to try a new sport (over 40% of the respondents gave this response) with smaller numbers (between 20% and 30%) hoping to get fit, get back into a sport that they had done previously or to make new friends and meet new people.

Key Point - The fitness aspect of Satellite Club participation is a factor in motivating participants to engage, but it is by no means the most important factor and trying new things and socialising are higher priority (if one combines 'making friends' and 'socialising with existing friends' into a single more general point).

All participants were asked to rate themselves against outcomes mapped by Skyblue and North Yorkshire Sport from qualitative research on a scale of 0-10, self-rating retrospectively for before they attended Satellite Clubs sessions and again for their ratings after attending.

The biggest differences identified were in participants' vitality and competence, with the smallest changes relating to relationships with family and friends. This reflects the frequency with which these changes were identified at qualitative level; improving skills and fitness were two of the most commonly-identified outcomes at that stage.

Participants in the quantitative survey were also asked what they thought the biggest difference the Satellite Club had made to them was. The results are summarised in the word cloud below, but the most common results were around friendship and improved quality and quantity of relationships, fitness, and new skills.

An interesting finding regarding males and females was that across all eleven outcomes females started at a lower rating than males, but the difference in percentage change was bigger across all outcomes in females. In one case, "relationships with friends and family", the lower percentage score after the sessions were males as females had surpassed their score.

Particularly big gains were observed among females in terms of their vitality (38% uplift), their self-esteem (27% uplift) and their emotional well-being (24% uplift). The largest gain for male participants was in their perceived competence (18% uplift).

Across the whole sample, the social return on investment can be valued at between £2 and £2.50 for every £1 invested. Based on the outcomes identified above, every £1 invested in supporting a female participant has delivered approximately £4 of return. This is not to say that male participants should be ignored, but it does suggest that greater efforts to engage women in sport via satellite clubs can work wonders, particularly around self-esteem and emotional well-being.